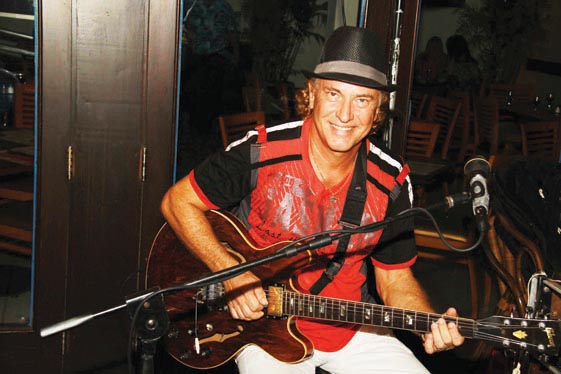 Popular local musician Richard Verge who entertains on the island under the moniker “Ricky Thomas” recently traveled to New Jersey in the United States to attend a book release party and a reunion with his bandmates. Ricky and his old band, the “Badlands Band”, rocked the crowds in two performances across the state. The first sold out show was held on a Friday night in the northern New Jersey town of Bergenfield where the Badlands Band was a popular draw at the now defunct “Circus Circus Rock Club”. Ricky and the Badlands Band entertained weekly during the early 1980’s at the Circus Circus Rock Club, drawing thousands of fans to their performances.

Ricky was the object of much interest and attention at the events, as he lives and entertains on the One Happy Island of Aruba. He is even more excited for the coming months because the list of old and new friends visiting Aruba is getting bigger and bigger! Ricky said: “I love my island home and acting as an ambassador for Aruba is easy because Aruba is a sparkling gem of an island set in the tranquil waters of the Caribbean. Who would not want to come to these beautiful shores?”

Now you can have the opportunity to see every week Ricky perform in his bluesy Caribbean style at Waters Edge Restaurant in Costa Linda Beach Resort.

A little girl with a big heart Previous
A day to remember. A day to honor Next