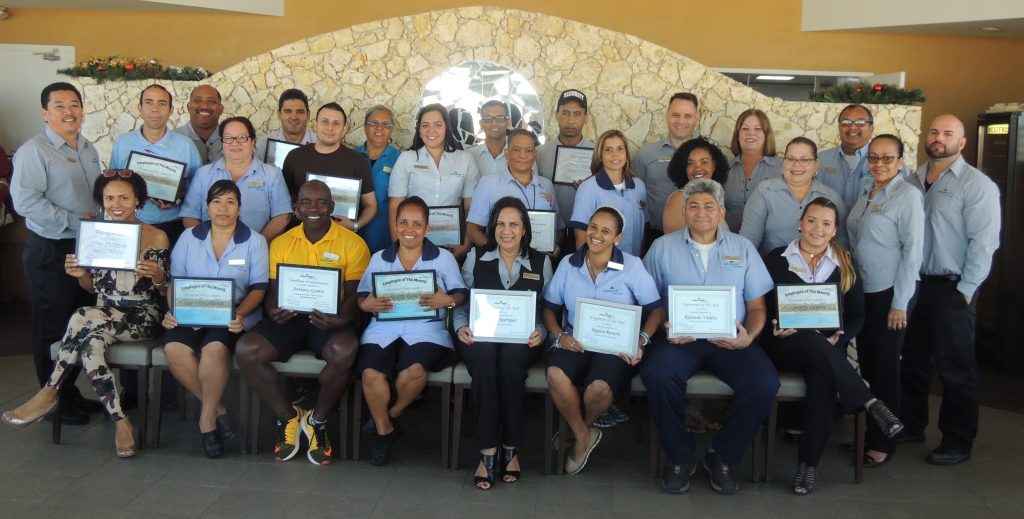 As guests of restaurateur Roy Leitch, they enjoyed plentiful platters, and much-appreciated time in community.

Heredia thanked his team members for going the extra mile in 2016, and helping the property obtain high rankings on search engines and in social media. “It is my pleasure,” he said, “to recognize terrific individuals who make considerable contributions to our business every day. They fulfill their professional obligations to the resort and connect in very meaning ways with our guests, who are valuable, multiple-time repeat visitors to the island.”

Is proud of the consecutive Certificates of Excellence, awarded by TripAdvisor, Bookings. Com and the likes, including a number of difficult-to-obtain environmental awards.

While the actual annual recognitions were handed out at the employee yearend party, Heredia called out his twelve “Employee of the Month” title winners, individually, to thank them for their accomplishments; he also single out supervisors and managers who excelled at their job.

Those recognized included Juana Lopez, for January, Javier van der Linde, for February, Luzdary Calderon, for March, Felicia Sarmiento, for April, Marcela Monero, for May, and Regina Rosario, for June, she also became Employee of the Year; Jurgen Marchena, for July, Rosa Rasmijn, for August, Joshua Henricus, for September, Ilaysa Leanez, for October, Joanne Oduber, for November and Brunic Croes, for December.

Four Supervisors distinguished themselves during the year, Melina Paul, in the first quarter, Anthony Gumbs, in the second quarter, Supervisor of the Year, Rolando Valdez, winner of the third quarter and Franklyn Eckmeyer, in the fourth quarter.

As manager of the year, the highly professional and supremely qualified Miriam Rodriquez, won top honors, and a round of applause from her peers.

The official part of the morning as Heredia presented his team with tokens of appreciation was animated by a group of enthusiastic and cheering guests who came in right off the beach to support the winners.

They also joined in to express their gratitude to two special team members, Rossy DeVeaux, Water’s Edge Restaurant, and Alfredo Cornet, RMH Security Service, who are not directly employed by the resort but spend much time caring for guests and looking after them.

Both Heredia and Leitch agree that Rossy and Alfredo are tremendous assets to their operation, as they provide guests with a genuine and heartfelt connection to the island and its people.